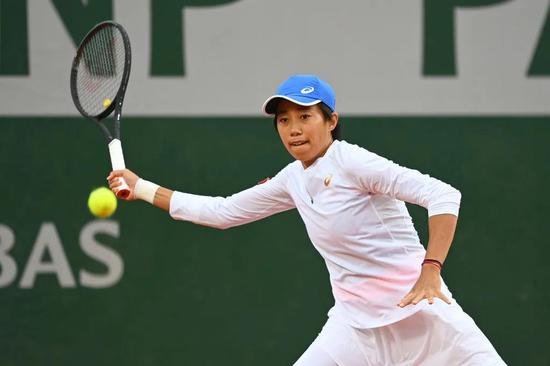 Facing an opponent known for his violent offensive, Zhang Shuai played steadily and steadily throughout, overcoming the unfavorable situation of being broken first in both sets, and finally ended the battle after 1 hour and 33 minutes of fierce fighting, winning three consecutive victories against the American star.

"The French Open is a very important event for me this year. Because I have good memories and some regrets here last year, I want to play better on clay." Zhang Shuai said after the match.

"Because of the epidemic, it is very difficult for professional tennis tournaments to develop this year and requires everyone's efforts. So I cherish every opportunity to play and strive to be in the best form."

"It is a very beautiful season to be able to come to Paris in autumn, and it is also very rare. I live in a designated hotel very close to the Eiffel Tower. I am very happy and enjoy this game."

After the restart of tennis in August, Zhang Shuai has not been able to find the feel of the game for a long time. Cincinnati, U.S. Open and Rome all encountered a round. However, she regained her form at Strasbourg last week, breaking through the qualifying round and reaching the quarterfinals.

Case also returned to the field at Cincinnati, and was eliminated from poor performance in the first game. She reached the top 32 at the US Open, but retired due to injury midway through the third round. The former French Open semi-finals did not participate in a clay court warm-up match and went directly to Paris.

The two sides have played against each other five times before, and Zhang Shuai maintained the lead with three wins and two losses. She won the last two conversations, including the 2016 Australian Open's breakthrough trip. However, Keys had the last laugh in the only clay-court confrontation between the two before, but that dates back to 2013 in Rome.

This reunion, the two exchanged a serve in the opening game. Zhang Shuai took the lead to stabilize the position and took the score to 2-1 after securing the serve. The next three games all ended with a break, with China Golden Flower 4-2 having the upper hand.

Zhang Shuai was forced to a tie by his opponents in the subsequent two serving games, and he also faced a break point test in the serve win game. However, she firmly held her advantage and took the inventory with a wonderful crossing, and finally won the first set with a strong serve, and took the lead 6-3.

Both of them focus on flat strikes, and the overall rhythm on the court is relatively fast. Case strengthened the offensive firepower in the second set. Zhang Shuai was broken when he had two points in the 40-15 game in the fourth game and fell into a passive 1-3.

However, the lead of the American star did not last long. She made mistakes in the next game and was immediately broken by the opponent. The two sides quickly drew 3-3. In the next game, Zhang Shuai wasted three break point opportunities, and Case was able to hold the first mover advantage.

In the next few rounds, there were no surprises on the field. Both of them secured their serve in their respective serving rounds and entered the tie-break in the second set. Zhang Shuai improved his concentration and shot a six-point climax after 1-2. With the opponent's final fore shot and the net, he took away a wonderful victory.

"I want to continue to encourage myself. Although the score in the first set looks easy, but the opponent is not comfortable, because the French Open is her first clay court event this year," said Zhang Shuai.

"I saw that the opponent did not move very smoothly. In the second set, she adapted a little bit. It was much more difficult for me than the first set. I hope I can focus on myself and do what I should do. Win the game in the second set."

China Jinhua played fairly solidly in the game: she scored 18 winning points, made 16 unforced errors, scored 77% of the first serve, and scored close to 70%, and won nine of them. Four of the break points were honored.

Next, she will face the local darling department in the net, the latter won 6-3 6-2 in a French derby against compatriot Pacqui who appeared with a wild card.

"The French Open is my favorite event, but I don’t have more chances to warm up on clay this year. But I played a few games at Strasbourg, so I feel more familiar with it. I can at least run on clay. Get up," Zhang Shuai said.

"The next round against the French players, no matter who they are must be clay court masters, I will continue to work hard and strive for a good performance."